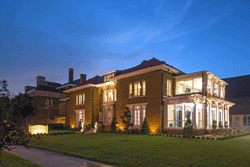 In 1910, Hiram Price Dillon traded his house, plus cash, to purchase land at the corner of Harrison and 9th Streets in Topeka, KS, and built a home where he and his wife could entertain. Enduring threats of demolition and changes in ownership over the century that followed, parties at Dillon House continue today thanks to a $5.5 million rehabilitation that returned the space to its historic glory. After securing ownership in 2013, Pioneer Group, Inc. leveraged $1.6 million in federal and state Historic Tax Credit equity, a property tax rebate through the county’s Neighborhood Revitalization Program, and other financing sources to create a space to house its offices on the upper floors and an event place on the first floor. The design team wove modern amenities into the historic features of the space, which is adjacent to the Kansas State Capitol. Since opening to the public on March 7, Dillon House has already hosted more than 3,000 guests. 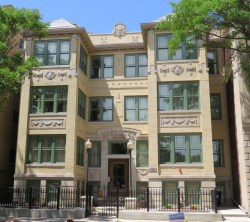 Like many parts of Detroit, the New Center Historic District lost its affluent residents to the suburbs throughout the end of the 20th century, and became a high-crime area that many were hesitant to invest in. Kathy Makino-Leipsitz, co-owner of Shelborne Development, began purchasing buildings in the area with the vision of restoring this once-cosmopolitan neighborhood. Shelborne rehabilitated buildings on Seward Street and Delaware Street with the modern renter in mind, including high-end amenities that would transform the neighborhood into a desirable one. All 49 units are designated for families making between 30% and 60% of the area’s median income, including five project-based voucher units. The $8.7 million project was funded through federal Historic and Low-Income Housing Tax Credits, as well as City of Detroit Neighborhood Stabilization funds and a deferred developer fee. 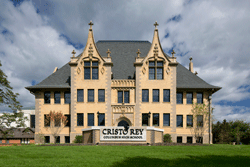 When Cristo Rey bought the former Ohio State School for the Deaf in downtown Columbus, the project was faced with years of deterioration and low-quality renovations that had obscured the property’s historic character. Cristo Rey not only sought to reverse the effects of renovations, but align the historic features they revived with the needs of a 21st century school. In addition to funding provided by the Diocese of Columbus, equity from both Historic and New Markets Tax Credits financed the $18 million renovation. The school’s students and staff can now enjoy the building’s refurbished, original hardwood floors and gymnasium. The building’s third floor features a new chapel and chemistry laboratory. Cristo Rey Columbus High School supports the larger Special Improvement District of which it is a part, and provides students with a state-of-the-art school and close proximity to the work-study jobs that help fund their tuition. 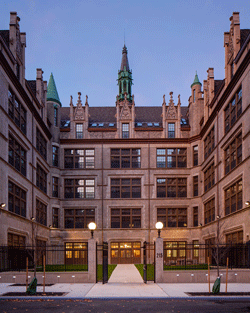 Twenty years ago, Public School No. 109 was set to be dismantled and demolished. The New York City neighborhood, known as both “Spanish Harlem” and “El Barrio,” sprang into action, launching a campaign to earn the century-old public school building a place on the National Register of Historic Places. After it continued to sit empty, subject to years of vandalism and decay, Artspace Projects, Inc. and El Barrio Operation Fightback teamed up to transform the building into a space where arts could thrive. The $53 million project created 89 affordable homes for local artists and 14,000 square feet of community space. In addition to preserving the property’s historic character, the development meets (and exceeds) Enterprise Green Communities standards. El Barrio Artspace PS 109 received 53,000 applications for 89 units. 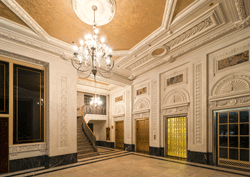 The Steger Building and Gibbons Building on historic Music Row were once the tallest buildings in Chicago. Now they, along with Pickwick Stables between them, offer 124 units of market rate housing and retail to the revitalizing neighborhood. Developer CA Ventures and architect, Pappageorge Haymes Partners, rehabilitated the terra cotta and brick clad steel frame buildings, which were once known for displaying the most expensive retail frontage in the city. The team resolved access and exit issues by creating bridges between the Steger and Gibbons Buildings on the upper floors. They also decided to use an offsite district cooling utility, creating space for an outdoor terrace that maintains the property’s historic roofline. Financing for the $68 million project includes equity from federal Historic Tax Credits. The property boasts a 95% occupancy rate and has contributed to the rebirth of the city’s downtown district. 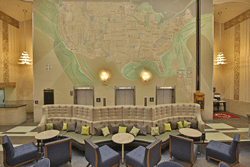 Throughout the early and mid-20th century, Chicagoans gathered in front of a 33-foot mural of the United States in the lobby of 68 E. Wacker Street to discuss the best routes to get away from the city. Today, most of us hold a digital concierge in the palm of our hands, but the map still lords over the lobby of that building, which is now itself a destination for out-of-towners. Developer Murphy Asset Management rehabilitated the old Chicago Motor Club into a Hampton Inn, blending relics of the past with a modern focus on sustainability that earned it a LEED certification. Murphy Asset Management leveraged a property tax incentive offered by Cook County that will result in reduced property taxes over 12 years, as well as federal Historic Tax Credits, to finance the $39 million project. 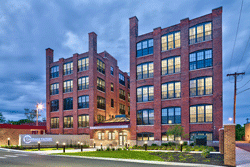 The Cunningham Carriage Factory spent the early 20th century moving people around, from carriages to ambulances to airplanes. Today, it provides 71 homes in Rochester, New York. Working with the New York Office of Mental Health, DePaul ensured 39 of these homes are uniquely designed for those with special needs, while the other 32 units are designed for individuals and families who earn less than 50% of the area median income. Financing for this $23 million project included federal and state Historic Tax Credits, a local historic tax incentive, federal and state Low-Income Housing Tax Credits, New York State Housing Trust Funds, an award from the Finger Lakes Economic Development Council, a $600,000 loan from the city’s HOME program, and a Payment in Lieu of Taxes agreement. Residents with special needs receive ongoing support from DePaul Community Services, Inc. DePaul Carriage Factory leased out within 30 days of opening.

Once a vocational school for African American women, the Margaret Murray Washington School in Washington, DC, spent nearly a century teaching skills, like sewing, cooking, and nursing. After it closed in 2008, community leaders sought to transform the property into homes for local seniors who no longer wanted to be single-family homeowners, but did not want to leave the neighborhood. Mission First Housing Group developed 82 housing units and created access to a wide range of services for residents, including health screenings and basic checkups, transportation, and social services. More than 20 residents attend classes each day that focus on wellness, exercise, and recreational activities. The mixed-income property offers 17 units for those making 30% of area median income, 61 units for those making 60%, and four market rate units. Mission First Housing Group financed the $23 million project using federal Historic Tax Credits, federal Low-Income Housing Tax Credits, HOME funds, and tax-exempt bonds. The financing for this project also included a ground lease from the District of Columbia with a seller take-back note for building acquisition. This allowed additional tax credit equity to be generated.

Built in 1909, Worcester Vocational High School, or “The Voke,” was one of the first vocational institutions in the country. The three-story, red brick, Classical Revival style building earned a place on the National Register of Historic Places in 1980. The school closed in 2006 and the building, which included three additions, became available for redevelopment. Though the space presented a number of design and construction challenges, WinnCompanies adapted it into 84 homes for Worcester, MA, residents of multiple income levels. The $34 million project leveraged federal and state Historic Tax Credits, federal and state Low-Income Housing Tax Credits, and tax-exempt bonds. Voke Lofts is 100% occupied. Voke Lofts is critical to the revitalization of Worcester, according the Timmy Award judge and Preservation Massachusetts President James Igoe. Providing a key component to a long-time transformation effort, Voke Lofts incorporates a new area into the downtown by connecting it with the city’s Main Street.