Tim Anderson pioneered the adaptive reuse of historical buildings. It’s fair to say that he helped invent this approach, and working with George Notter ushered in a whole new era in the United States of recycling older structures to new uses rather than just tearing them down. 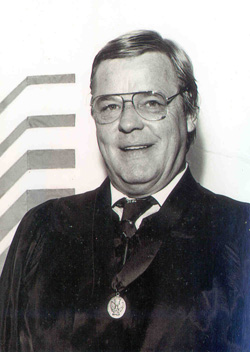 When Tim died February 2001 at the age of 68, he left a formidable legacy of projects behind. In the mid-1960s, he helped launch the redevelopment of Boston’s waterfront by transforming a macaroni factory in the city’s North End, the Prince Spaghetti Building, into apartments. He built on that achievement with a succession of other memorable Boston-area projects. These included an adaptation of Old City Hall for mixed use—the nation’s first privately-funded restoration project—and the rebuilding of the Tannery in Peabody as affordable housing. His conversion of the old Central Grammar School in Gloucester into housing for the elderly became a national prototype for the reuse of surplus schools in urban areas. His final project turned the Methuen Mills into the Mills Falls Apartments.

But although much of Tim’s work was in New England, he did not limit himself to this region. He was proud of authoring a study that helped preserve South Beach in Miami. He also worked on Knoxville’s Old City Hall, Warehouse Row in Chattanooga, and the Terminal Station in Macon, Ga.

Tim was more than just an architect. In college he was a superb athlete, chosen as the captain of Harvard’s football team. He was also an excellent teacher, both in formal settings—he taught adaptive reuse at Boston University—and informal ones. In addition, Tim helped rewrite Massachusetts’ building code to encourage historical preservation.  He was a founder of Anderson Notter Finegold Architects in Boston in 1962, and later was a principal at Platt Anderson Freeman Associated Architects in Cambridge.

Tim was widely honored. He received three National American Institute of Architects awards for historical renovation. He also was the recipient of the 25th Anniversary Preservation Award from the Massachusetts Historical Commission in 1988.
In 1985 he was admitted to the Fellowship of the American Institute of Architects, an honor limited to less than 1% of the Institute’s membership.

Born in Jamestown, N.Y., Tim was a graduate of the Phillips Andover Academy, Harvard College, and the Harvard Graduate School of Design.