House Ways and Means Chairman Kevin Brady (R-Texas) released a third iteration of a year-end tax package. The new version includes the same provision in his original and second bill that clarifies that veterans are a specified group for preferences within the Low Income Housing Tax Credit (LIHTC) program and extends the LIHTC public use provisions from nine percent allocations to also include four percent bond allocations.

END_OF_DOCUMENT_TOKEN_TO_BE_REPLACED

Congress returns this week after its Thanksgiving break with a full agenda.  Priorities include extending funding for most federal agencies for FY 2019, which expires on Dec. 7, and a potential tax package. Chairman of the House Ways and Means Committee Kevin Brady (R-TX) released a tax bill that Congressional Republicans hope to pass during the lame-duck. The bill makes corrections to the Tax Cuts and Jobs Act of 2017, extends several expiring tax measures, includes disaster tax relief and makes changes to retirement and savings tax provisions.

END_OF_DOCUMENT_TOKEN_TO_BE_REPLACED

House Ways & Means Chairman Kevin Brady (R-TX) has announced he has completed a draft tax measure to fix the “retail glitch” in the new tax law and address many tax extenders.  The draft measure is expected to be circulated in the next few days. It is unclear at time of press whether any affordable housing, historic rehabilitation or New Markets Tax Credit provisions are included in Chairman Brady’s draft, which is said to include between 70-80 alterations to last year’s the tax law, HR 1.  The measure is a potential vehicle for several NH&RA priorities including fixing the 4 percent LIHTC rate, basis adjustment provisions for the historic credit and an extension of the NMTC, which is set to sunset next year.  We will update this story as it develops.

The Internal Revenue Services (IRS) has issued an updated Draft Form 3468 and Draft Instructions for the 2018 tax year.  This is the form that taxpayers must submit in order to claim the federal historic tax credit, as well as several other investment and energy credits. Notably, the form answers a significant question coming out of tax-reform — when the Historic Credit was amended to be claimed “ratably” over 5 years. The form indicates that post-2017 historic credits projects not covered by the transition rules will claim the the credit at a rate of 4 percent per year over five years, beginning with the year placed in service. Prior to tax reform, the historic credit was claimed when the project was placed in service. A final release of this form is expected later this month and it is possible, though unlikely, that the draft form and its instructions could be changed

On Monday, Sept. 10, House Ways & Means Committee Chair Kevin Brady (R-TX) introduced a three bill follow-up to the  Tax Cuts and Jobs Act. These bills constitute Republicans’ Tax Reform 2.0 package and primarily lock in individual and small business tax cuts made in the legislation passed in December 2017, and reform savings- and education-related tax provisions.  The measures as introduced do not make any enhancements or changes to the LIHTC, Historic Rehabilitation Tax Credit or New Markets Tax Credit.  A markup was scheduled for September 13 and the measures were approved by the House Ways & Means Committee on a party-line vote.  Speaking to reporters after the markup, Brady declined to predict whether the bills would go to the House floor. “We have it ready for them, and in our conference I see strong support for permanency, savings, and innovation,” he said. “We’re hopeful that the Senate can pick the various bills up as they see the 60-vote support.”  The legislative package was adopted by the House of Representatives on September 28 by a largely party-line 220-191 vote.  Democrats have indicated that the measures would be “dead-on-arrival in the Senate.”

The following bills were introduced as part of this Tax Reform 2.0 package:

According to the Joint Committee on Taxation estimates, the three measures would cost $657.3 billion over the next 10 years.

This week, The New York Times published a front-page story on the impact of the tax reform bill on affordable housing. The story cites Novogradac’s estimates of the units that will be lost (235,000 units) as a result of the lower corporate rate, provides a good overview of the growing affordable housing needs in our country, and even mentions the Cantwell-Hatch bill for improving the LIHTC.

Today, the Senate and House have both passed the conference report of HR 1 – the GOP’s tax overhaul plan. The bill is expected to be signed into law by President Trump later this week.

END_OF_DOCUMENT_TOKEN_TO_BE_REPLACED

Rep. Randy Hultgren (R-IL-14) is circulating a letter to House and Senate leadership opposing the proposed elimination of tax exempt private activity bonds in the House’s version of the Tax Cuts and Jobs Act (H.R. 1), focusing on the need for private activity bonds to support investments in our nation’s infrastructure.

END_OF_DOCUMENT_TOKEN_TO_BE_REPLACED

The House is prepared for a Thursday floor vote on The Tax Cuts and Jobs Act (H.R. 1), meanwhile, the Senate Committee on Finance is in its third day of markup and a modified chairman’s mark was released by Chairman Orrin Hatch (R-UT) Tuesday night.

END_OF_DOCUMENT_TOKEN_TO_BE_REPLACED

That significant reduction in housing production would also mean the loss of more than a million jobs and billions of dollars in business income and federal, state and local tax revenue across the United States.  Click here to view the full post on Novogradac & Companies website. 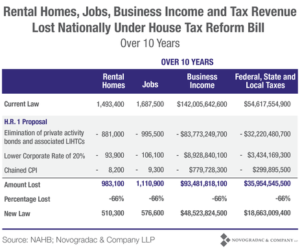 Here is how these losses would break down by state: