Washington, DC—November 19, 2013—Jack Manning, co-founder of Boston Capital, the largest owner/ investor in apartment housing in America and a pioneer in government advocacy for affordable housing, and Vincent F. O’Donnell, spearhead of a national initiative to save at-risk affordable housing in America, have been awarded the 2013 and 10th Annual Affordable Housing Vision Awards by National Housing & Rehabilitation Association.  Popular innovators and visionaries, Mr. Manning and Mr. O’Donnell were recognized for their years of dedication, stewardship, and professional contributions in the affordable housing and community development industry at a ceremony in Boston on November 13. 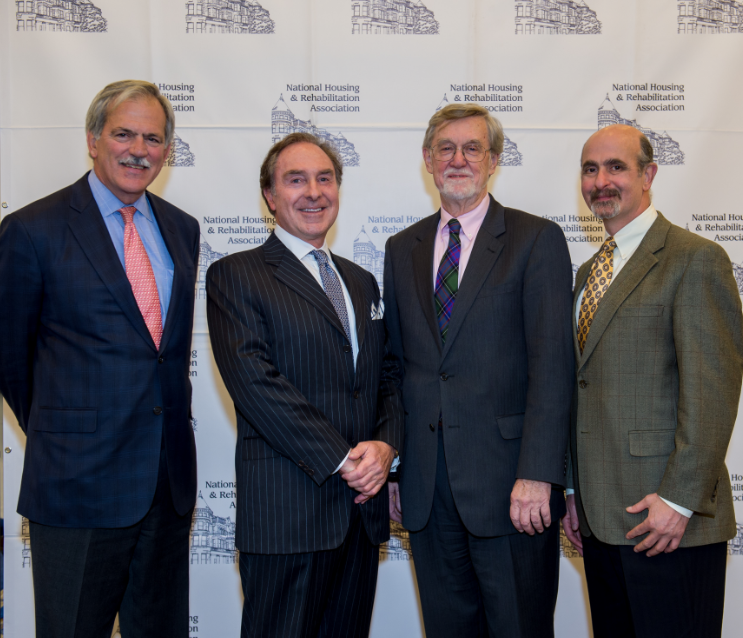 “I am truly inspired by the work of Jack Manning and Vince O’Donnell,” says Thom Amdur, Executive Director of NH&RA.  “Through Jack’s commitment to Congressional advocacy and his instrumental involvement in the creation of the housing credit and through Vince’s perseverance as a non-profit affordable housing preservation leader, both men have devoted their careers to improving the lives of millions of less fortunate individuals and families. They have exhibited great foresight, incredible success, and more importantly, have set an excellent example for future leaders in the industry.”

Jack Manning formed Boston Capital Corporation in 1974 along with now-retired partner Herb Collins to provide equity investment capital for the development of rental housing. Over the last 37 years, Boston Capital has acquired more than 3,100 multifamily apartment properties with over 190,000 apartment units with development costs in excess of $15 billion. Manning and his staff were also instrumental in the creation of the Low Income Housing Tax Credit (LIHTC) program when it was enacted by Congress in 1986.

Manning attributes his success in both the business world and in Washington to his persistence, unwavering determination, and willingness to build and maintain Congressional relationships. “Over the years, we’ve learned that fostering political relationships is equally as relevant and important to furthering the programs most important to the affordable housing industry,” said Manning during his acceptance speech for the 2013 Vision Award for Private Sector Achievement.  “Our greatest political achievements have been realized through simply inviting Congressional members to LIHTC properties so they can see and feel its impact or sending letters after a deal closes indicating the number of units and jobs being created in a district. If a member understands what a property does for their community, they are more likely to fight to maintain the program that assisted in its development,” he said.

“The success of the low-income housing industry is really no accident,” says Vince O’Donnell. He continued after accepting the 2013 Vision Award for Public Sector Achievement, “Over the years, we have benefitted from the fortitude and determination of committed professionals, advocates and tenant activists to resolve issues and overcome challenges. However, moving forward as the industry changes, past and future leaders must continue to embrace and evoke a unique combination of passionate determination and disciplined restraint in order to successfully steward the industry through a new era of adversity.” Mr. Manning and Mr. O’Donnell join other distinguished and accomplished NH&RA Vision Award honorees, including Kate Racer from the Massachusetts Department of Housing and Community Development, Mayor Thomas Menino from the City of Boston, and the Honorable Barney Frank former U.S. Representative from the state of Massachusetts. A complete list of previous honorees can be found below.

Videos of the awards ceremony and more information about the Vision Awards can be found at /about/affordable-housing-vision-awards/.

Oklahoma City issued a Request for Proposals (RFP-OCITY-128) for construction or rehabilitation of Affordable Housing.