President Obama is wrapping up his final term with an ambitious FY-2017 budget proposal for the fiscal year ahead.   The budget serves as a statement of the administration’s policy and funding priorities. The budget solidifies the Administration’s commitment to expanding opportunities for private developers to build housing stock that is affordable to individuals and families at all income levels and improve the quality of existing federally-assisted housing. It seeks to strengthen the Low-Income Housing Tax Credit (LIHTC) and New Markets Tax Credit (NMTC) Programs. It also proposes higher funding levels for several key U.S. Department of Housing and Urban Development (HUD) programs.

The Obama Administrations sought similar LIHTC program changes in the FY-2016 proposed budget. The budget would expand states’ LIHTC authority by allowing them to convert up to 18% of their private activity bond volume cap into 9% LIHTC allocations. The budget would also remove the cap on the number of qualified census tracts that HUD can designate.

Another series of proposed changes would affect states’ Qualified Allocation Plans. States would be required to include both affirmatively furthering fair housing as an explicit allocation preference as well as the preservation of federally-assisted affordable housing as a selection criterion. Once again, the budget proposes using an income-averaging rule to determine a project’s compliance with income eligibility guidelines in order to encourage income-mixing in properties.

The proposed FY-2017 budget seeks a permanent extension of the program and $5 billion in allocating authority each year. It would also allow NMTC to offset Alternative Minimum Tax liability. This proposal mirrors the one presented in the President’s FY-2016 proposed budget.

The budget proposes this new tax credit, which is targeted at communities that do not  necessarily qualify as low-income communities, but that have suffered or expect to suffer an economic disruption as a result of a major job loss event, such as a military base closing or manufacturing plant closing. The Obama Administration also introduced this tax credit in last year’s proposed budget. Applicants for the credit would be required to consult with relevant State or local Economic Development Agencies (or similar entities) in selecting those investments that qualify for the credit. The credit could be structured using the mechanism of the New Markets Tax Credit or as an allocated investment credit similar to the tax credit for investments in qualified property used in a qualifying advanced energy manufacturing project. The proposal would provide about $2 billion in credits for qualified investments approved in each of the three years, 2017 through 2019.

Build America Bonds are a lower-cost borrowing tool for State and local governments that were enacted as part of the American Recovery and Reinvestment Act of 2009. America Fast Forward Bonds would build upon the successful example of the Build America Bond program by providing a new bond program with broader uses that will attract new sources of capital for infrastructure investment. In addition to including financing for section 501(c)(3) nonprofit entities, eligible uses also include financing for the types of projects and programs that can be financed with qualified private activity bonds, subject to the applicable State bond volume caps for the qualified private activity bond category. The proposal would be effective for bonds issued after December 31, 2016. 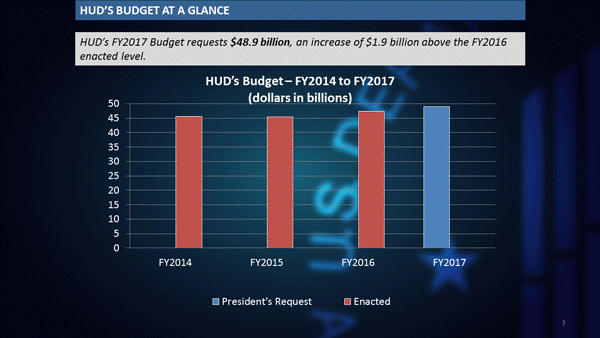 According to Secretary Castro, the largest part of the HUD budget is dedicated to supporting the families who already live in federally-assisted housing. As a result, President’s FY-2017 HUD budget proposes increased funding for several key programs.

With a proposed 2% increase in funding, the Obama Administration commits to fully funding all existing PBRA contracts.

The budget proposes heavy investment in this program with a 60% increase in funding levels from last year. This additional funding would support
implementation grants six new Choice Neighborhoods, as well as for approximately 15 new Promise Neighborhoods, and numerous other planning
grants for communities.

The Rental Assistance Demonstration program itself does not require additional subsidy. The additional $50 million in funding sought by the Obama Administration would be dedicated to converting an estimated 25,000 units of high-priority public housing. Without this additional funding, the conversions deeply distressed deals would not be feasible.

The budget proposes to remove the 185,000 unit cap in place for RAD conversions and eliminate the 2018 RAD application submission deadline. The Obama Administration would also like to allow Section 202 Housing for the Elderly developments to convert under RAD.

Section 202 Housing for the Elderly Program

The Obama Administration proposes a 17% increase for this program in order to maintain the program’s current activities.

The Obama Administration proposes a 2% increase for this program in order to maintain the program’s current activities.

The Public Housing Operating Fund would see a $69 million increase in funding, while the Public Housing Capital Fund would see $35 million in cuts. The Administration emphasizes that this cut is not meant to reflect less need. It is an estimate of the minimum funding required to avoid cutting the number of residents served while limiting acceleration in the ongoing deterioration of public housing stock.

Tenant-Based Rental Assistance is a major component of the Obama Administration’s efforts to reduce chronic homelessness. The budget proposes increasing funding for contract renewals by $765 million and adding 10,000 new vouchers that would be targeted to homeless families with children. It would also create a new $7 million set-aside for Tribal Veteran Affairs Supportive Housing vouchers. The budget does not propose any new traditional VASH vouchers, but would renew all of those that already exist. The Administration also proposes a new Housing Choice Voucher Mobility Demonstration. These funds will be distributed to about 10 regional housing program sites with participating public housing authorities or private non-profits over a three-year period to provide outreach to landlords and counseling to voucher recipients on the benefits of opportunity-rich, low-poverty neighborhoods, as well as facilitate regional collaboration.

The budget increases funding for this program by $414 million, which is another key component of the Administration’s efforts to end chronic homelessness. HUD would create an additional 25,500 new units of permanent supportive housing, 8,000 units of rapid rehousing for homeless families, and fund a $25 million in new projects targeted to homeless youth with this funding.

Funding levels for this program would remain the same.

Funding for FY-2017 would match FY-2016 levels, which were established after tireless advocacy by the affordable housing community during the last budget negotiations when the HOME program experienced significant threats. According to Enterprise, the Administration proposes policy changes to the program, including legislative language to eliminate the 24-month commitment requirement, eliminate the 15 percent Community Housing Development Organization (CHDO) set-aside, establish a single qualification threshold of $500,000 irrespective of the appropriation amount, revise the current “grandfathering” provision so that participating jurisdictions that fall below the threshold three years out of a five-year period are ineligible for direct formula funds, and allow recaptured HOME CHDO technical assistance funds to be reallocated as HOME technical assistance funds.

Along with the Public Housing Capital Fund, the Community Development Block Grant Program was one of the few housing programs that saw a significant cut. The budget proposes funding the program at $560 million less than FY-2016. A Fact Sheet from HUD suggests plans to make a series of reforms to the program to enhance local decision making, improves program accountability, and provides more options for regional coordination and planning.

The President’s proposed budget is just the first step in the appropriations process. Next, both the House and the Senate will respond by setting the total level of discretionary funding for the fiscal year. Once the total level is approved by a vote, the appropriations committees in each chamber (House and Senate) become responsible for determining program-by-program funding levels. The total funding is divided up among 12 different appropriations bills, each assigned to a subcommittee. The bill most relevant to affordable housing in the Transportation and Housing and Urban Development (THUD) funding bill.

In an ideal world, all of these appropriations bills would pass by the start of the federal fiscal year on October 1. In reality, this has rarely happened in recent years. Instead, legislators work on creating an Omnibus bill, which combines the 12 appropriations bills into one comprehensive funding bill. Until this bill is passed, Congress continues funding the government by passing continuing resolutions. CRs, which are short-term funding bills that typically mirror funding levels from the previous fiscal year, keep the government from shutting down.

Once a bill passes in the House and the Senate, it goes to the President’s desk where it will either be vetoed or signed into law.

We will add analysis USDA Rural Development programs to this story as we analyze those budget proposals.

Last week, the Biden-Harris administration issued a press release, Blueprint for a Renters Bill of Rights, and Resident-Centered Housing Challenge.

HUD announced it will hold three virtual briefings on the proposed rule for program participants and other stakeholders, at which it will cover the components of the proposed rule and present supplementary information tailored to the intended audience for each briefing.

Mayor Eric Adams (D) made housing one of his main priorities at his 2023 State of the City speech along with jobs, care, and safety and quality of life.

The Department of the Treasury announced it will reallocate $690 million of Emergency Rental Assistance (ERA) program funding to assist with preventing evictions.